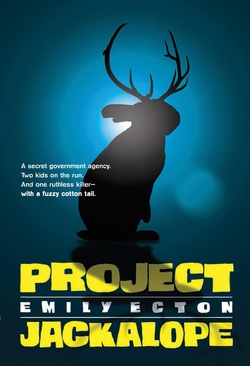 Jeremy thought he was doing Professor Twitchett a favor by running errands for him after the professor and Agatha have a falling out. But when the professor disappears leaving Jeremy with what appears to be a jackalope and suited men showing up to question him, he has to turn to Agatha for help. Together the two of them try to solve the mystery of the professor's disappearance, elude the men with secret weapons who are chasing them, find out about a traitor, and save the mythical creature they become attached to.

Project Jackalope by Emily Ecton, is a middle-school adventure with intrigue, high level science experiments, neighbors who are more than they seem and two young teens who discover that what goes on in the lunchroom and in the hallways of school is not necessarily the most important things in life.

Jeremy is funny as the hapless kid who unwittingly gets involved in high-level intrigue. But he's got a soft spot for animals, even one as ornery as Jack, who likes to drink whiskey and can shred clothing with his horns but maybe isn't so vicious after all. Project Jackalope is truly delightful.