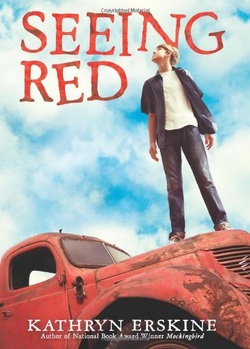 The year is 1972 and things are changing in tiny Stony Gap, Virginia. There’s a For Sale sign in front of 12-year-old Red Porter’s house; his daddy has died, and now his mama must sell both the house and their combination garage (“Porter’s: We Fix It Right”) and convenience store (“What-U-Want”). Worse, she then plans to move the family to Ohio. Red is determined to stop her, but what can one 12-year-old do? When he turns to a local gang for help, he unwittingly finds himself complicit in a case of racial bigotry that leaves his friend Thomas injured and Red riddled with guilt. Meanwhile, school has started, and he has a new teacher whose passion is history. “History’s boring and stupid,” Red protests—but it’s history that may offer him and his family a way to remain in Stony Gap. In the process of attempting to right a century-old wrong, Red learns the salutary lesson that he can make his own history. Erskine has written a powerful indictment of injustice in all forms and an equally powerful and dramatic demonstration that young people, by taking individual action, can actually change history.