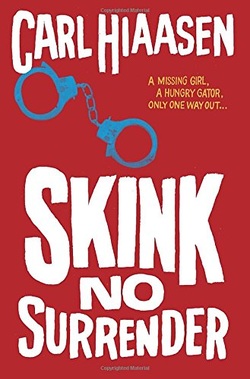 Richard and his cousin Malley are best friends. But while Richard is pretty levelheaded, Malley tends to get into trouble. So Richard is only mildly surprised to discover that she's run off with a guy she met on the Internet in order to avoid being sent to boarding school in New Hampshire. Richard wants to go find her, and luckily he runs into what may be the perfect person to help him do just that: a ragged, one-eyed ex-governor of Florida named Skink. With Skink at the helm, the two set off across Florida in search of Richard's cousin. While Malley's character is not as fully developed as the others and the story seems highly improbable, Skink, a favorite character from Hiaasen's adult novels, is incredibly memorable. Whether it's diving in to a gator-infested river after a rogue canoe, getting his foot run over by a semi while trying to save a baby turtle, or hiding out in the sand to save the next turtle, Skink is always full of surprises. And like a cat with nine lives, one never knows how he'll make it out or what will happen next.