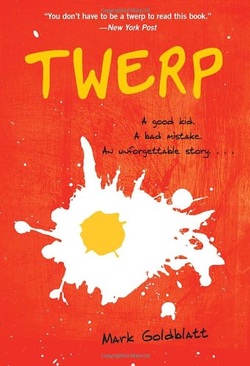 Sixth-grader Julian Twerski discovers a love for writing as he documents his year for a teacher who wants him to come to terms with an act of bullying on his part. Set in Queens in the author’s 1960s childhood, this period piece spotlights a time when boys were independent, self-sufficient in their entertainment, and entirely unsupervised. Julian’s gang, led by his best friend, Lonnie, hangs out in a vacant lot or neighborhood playground, entertaining themselves by throwing things, exploding fireworks, and ragging on each other. For Lonnie, Julian writes an admiring letter to classmate Jillian, who responds by becoming interested in Julian instead. This leads to a first date, a first broken heart, and a temporary quarrel with his pal. Meanwhile, Julian’s composition entries circle around to the incident that led to his punishment. The cleverly constructed first-person narrative leads readers into sympathy with the precocious narrator, so that the reveal is a surprise and the denouement a relief.